You are here: Home / Panama / Transporting the Dogs: Bringing our Pets to Panama 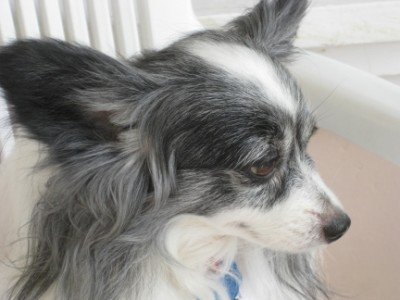 Our three dogs have finally joined me to live the expat life in Panama, but there were lots of twists and turns in the process since I last wrote about it in December.

Back then, we had followed airline guidelines and purchased proper travel kennels for them. We were putting two of the dogs in the larger kennel together, and one in the smaller kennel.

Well, after training them so they’d be relaxed and groovy with this arrangement during the stress of the actual flight, the airlines went and changed the rules on us.

I got a frantic call from my husband, who was back in Florida attempting to orchestrate the pet move.

“They’re telling me I can’t put two dogs together in the same kennel at all. What am I supposed to do?”

He checked with several airlines and got the same story from all of them. Apparently the whole “ship each pet separately” is a new IATA (International Air Transport Association) guideline. Nobody would deviate from it for any reason.

Pretty ironic when their first piece of advice about successful pet shipping is:

“It is important to train your animal to its new surroundings. Let it become familiar with the crate or kennel a few weeks or months before your planned departure. Animals behave perfectly fine when accustomed to the kennel or crate they are transported in.”

We even got a letter from our veterinarian stating his recommendation that the two who are used to rooming together travel together in the same kennel. The manager of the baggage department at the airline essentially slammed the door in my husband’s face.

This was not encouraging.

In the midst of it all, I flew back to Florida for our son’s wedding.

We decided it was more important to focus on family and friends for the weekend, and that we’d deal with the dog problems afterwards. I was able to compartmentalize, but my husband, apparently was not.

So, during the weekend, various family members tried to give me advice about what we should do with our dogs. I politely but firmly told each of them that we had agreed to put it on hold until after the wedding, and that I wanted to keep it that way.

Nevertheless, my father-in-law managed to tell me he thought we should take the dogs to the pound and be done with them. . .

It was hard work.

Anyway, the wedding was great, and it was wonderful to see friends and family.

The morning after the wedding we tackled the dog transport again. The four big problems were:

Because of the temperature restrictions, my husband would need to buy an unrestricted (i.e., very expensive) ticket so he could change his flight if need be. That also added an element of uncertainty and another level of expense — more nights in a hotel, additional car rental fees, meals, etc.

Our oldest son, who’s very logical, listened to our tale of woe. He asked probing questions.

I mentioned that we still had the option to hire a pet moving professional to handle logistics for us. I had already contacted a recommended Panama pet mover and gotten a rough estimate of the cost for that service.

Our son did the math and pointed out that the cost of hiring a professional wouldn’t be much more than the cost of doing it ourselves, with all those extra costs.

So, although we’re very much bootstrapping, do-it-yourselfers, with bit the bullet and hired Panama Pet Relocation.

Total cost for their services? A whopping $4,200 (keep in mind every situation is unique with different needs and costs).

Part of that covered costs that would have come straight out of our pockets in any case:

They determined that the best way to get the dogs from Orlando to Panama was to drive them first to Miami, then fly them out of Miami at night.

So last Thursday morning, a driver picked them up and drove them to Miami.

After the dogs’ departure for Miami, my husband flew out of Orlando on Thursday afternoon, arriving in Panama that evening.

On Thursday, the company went to the USDA and the consulate for those approvals, and at 11 PM the dogs flew out on a DHL plane, arriving at PTY at 2 AM. They stayed there until 7 when the vet arrived, and then the company took them through the veterinary clearance process, delivering them to my husband at his hotel at about 10:30 AM.

From there, three very excited (but sadly dehydrated!!) dogs and my husband left Panama City for Las Tablas. For this part of the trip, we hired a van and driver. At a cost of $400, it wasn’t much more than the out-of-pocket costs to rent the van, gas it up, drive it to Las Tablas and then back to Panama City, and without the wear and tear of doing it when already exhausted.

Happily, they’re all here now and have had a couple of days to relax. The dogs seem to be adjusting well to their new home. 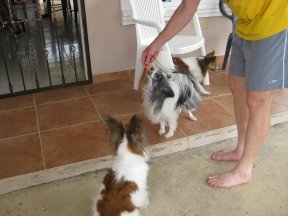 If You’re Planning to Bring the Family Pet(s). . .

If you have a dog or cat — especially if it can travel in the cabin under the seat — you shouldn’t have a lot of difficulty bringing your pet with you to Panama. As long as it’s healthy and you’ve done the paperwork, the process will be pretty straightforward and not very expensive.

However, if you have more than one, think long and hard about the new IATA guidelines. Requiring each animal to have its own kennel, in my opinion, has everything to do with profits and nothing at all to do with the animals’ welfare. It adds layers of difficulty and expense to the process.

My husband admits that, had he had any inkling of how complicated it would become, he’d have seriously thought about finding new homes for one or two of the dogs months ago. That was definitely not an option at the last minute.

In our situation, although not what we planned or anticipated, hiring a professional to handle the logistics and take the stress was well worth it.

But I hope we never have to go through that again. 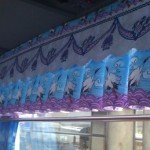