You are here: Home / Archives for baby boomer

Last October I asked the question, "Is US health care driving Americans to move abroad?" You can read the original post here. I followed up the question and post with a poll. When the poll closed, 19% of respondents listed health care as the "most important" reason for their move and a whopping 69% … END_OF_DOCUMENT_TOKEN_TO_BE_REPLACED

Writing for International Living today, Dan Prescher described a meeting he recently attended with "government officials, local entrepreneurs and international consultants" in Merida, Mexico a few days ago. I thought this was interesting enough that I postponed the post I was planning for today to … END_OF_DOCUMENT_TOKEN_TO_BE_REPLACED 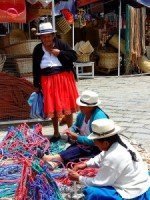 International Living has just named Cuenca, Ecador its Best Retirement Haven for 2009. The cover story, in the September issue of the magazine, outlines why Cuenca beat out the competition as the best place for expat retirees. They describe the city, Ecuador's third largest, as "a place of old world … END_OF_DOCUMENT_TOKEN_TO_BE_REPLACED

Recently, I posed the question What Kind of Expat Are You? I attempted to categorize expats into various categories. Here’s what I said before about a type of expat I categorized as an Economic Escapist: … END_OF_DOCUMENT_TOKEN_TO_BE_REPLACED