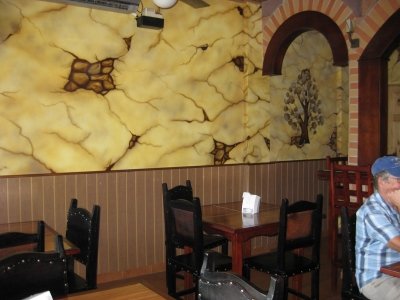 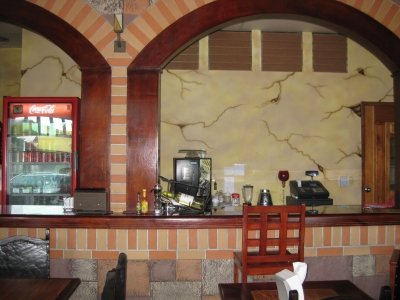 I’ve just discovered a wonderful new place to eat in Las Tablas, Panama! Apparently it’s been open for six months or so but it didn’t show up on my radar until last week.

A few weeks back I wrote about having a fancy lunch up in Chitre. At that time I explained that there aren’t many restaurants in the area to have a meal (lunch especially) that’s not the tipico fare. Well, I’m pleased to say, that’s no longer the case.

Located in the Plaza Gringa, just a couple of blocks from the Iglesia Santa Librada at the downtown Parque Porras, this little bistro is called Dolce & Saladito.

Small and informal, they serve a variety of appetizers, salads, sandwiches, pizzas and desserts. They make the bread for the sandwiches and I believe the desserts are homemade as well.

I’ve been there three times now. The first time we went with another couple. Our orders included:

Bill’s pretty picky about his burgers, so he pronounced it just “okay.”

All the pizza I’ve seen here until now has been thin crust. I happen to like a thicker crust, so I was happy to see this one was nice and thick. Toppings were generous, and the sauce was flavorful.

The philly steak sandwich arrived on a beautiful braided roll.

The club sandwich was very tasty, definitely the best I’ve had for a very long time.

All of us noticed that they took some care with the presentation. My club sandwich arrived with each of the four sandwich quarters standing around a mound of French Fries in the middle, and it was done with some artistry. I wish I’d taken a picture of it before I spoiled it by gobbling it down.

My husband and I went back a few days later. He ordered pizza again, but this time with a few different toppings including hot peppers. Again, the pizza arrived with a nice, thick crust, the sauce was tasty, and the toppings were good.

I asked for the Philly steak sandwich this time and it was excellent. Beef here can be tough, but this was tender, well cooked and cut into appropriately bite-sized strips. There was plenty of cheese, and the bread was first rate. 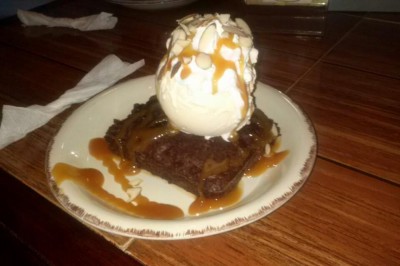 We’ve been told they serve an excellent brownie there, but they were all out both times we visited. (I found the picture on Foursquare.)

On our second visit, they had some yummy-looking cupcakes in the display, so I decided to try them out. Cake here is not like the cake we’re used to in the US. It’s coarser and not as sweet. These cupcakes seemed more like muffins with frosting to me, although the nutella filling was quite delicious.

My only complaint is that they don’t serve iced tea (my beverage of choice). They do offer a variety of soft drinks and wine as well as fruit drinks and milkshakes.

I tried the cafe mocha shake. It could have had more mocha flavor, but it certainly slid down easily!

You can see more about the restaurant on Foursquare and Facebook.

They’re open most days from 3-10 PM (sadly, not for lunch) and are a welcome addition to the Las Tablas restaurant scene. 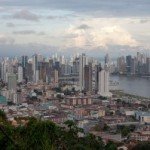