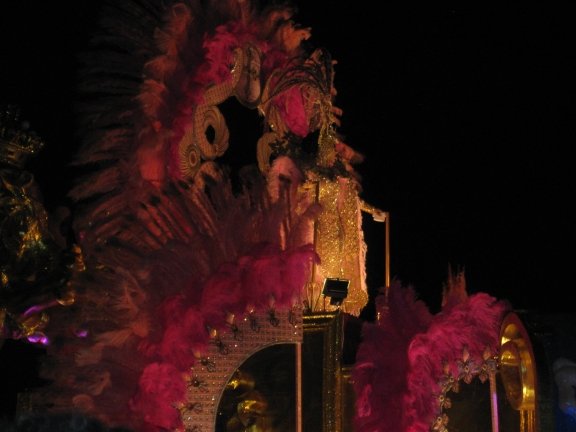 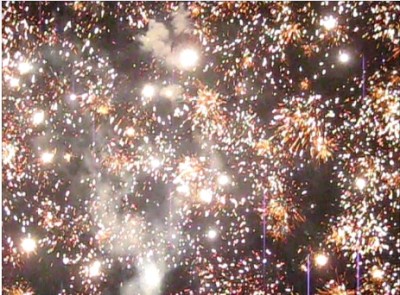 We just celebrated our first New Year’s in Las Tablas, Panama, and this town certainly knows how to throw a party!

Our evening started at about 10:30 PM. A Panamanian friend had invited us to join his family for dinner at that fashionably late hour. When we arrived, we found the entire neighborhood partying in the street. Neighbors were going back and forth with plates of food — it’s important to share on this date. Several people arrived at our friends’ house carrying covered plates from their dinners, and left carrying plates from our friends.

Then, a few minutes before midnight the fireworks started.

Now, I have to admit, I’ve seen some spectacular fireworks displays over the years. They know how to light up the sky in Boston and New England, where I spent my childhood. Then for about 24 years I lived near Walt Disney World in Florida where they have stunning fireworks throughout the parks 365 days a year.

I was blown away by the fireworks I saw this New Year.

First off, they were everywhere. Sure, there was the “official” display in the town’s central park. Everywhere else in town, people were lighting off their own and some of the neighborhood displays were spectacular.

Second, in the US the fireworks displays are restricted by all sorts of rules. That means that they’re inevitably far away from wherever you’re watching. Not so here! They were blossoming directly over my head! In fact, they were so close that my camera couldn’t get them all because they just wouldn’t fit in the frame.

They’re much more impressive when you feel you can just reach out and touch them.

Sometimes I didn’t know where to aim my camera because there were spectacular displays happening in several places at once.

After a good long while — 15 or 20 minutes maybe — the displays finished up. At that point, we started walking towards Parque Porras, Las Tablas’ downtown park. Here partiers were gathering to see the parade.

Las Tablas has two queens every year, one representing Calle Arriba and the other Calle Abajo. Each has her own elaborate float, attendants and band. 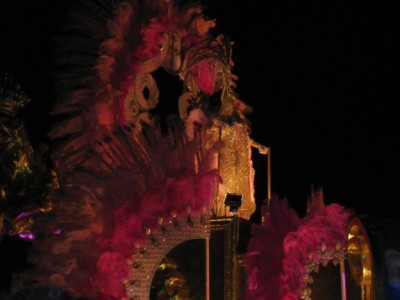 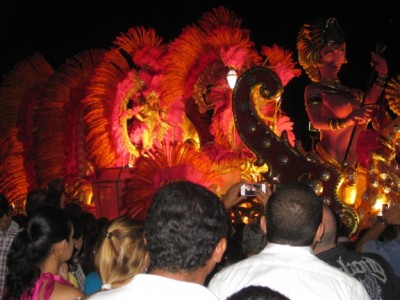 Each float, followed by the band, slowly makes its way around the square. After the first one passes, there’s a break for more fireworks. Then more fireworks after the second completes her circuit.

The area’s jam-packed with people, most of them dressed up. Women are wearing sequins and high, high heels. The hot-dog vendor to our left is doing a brisk business.

Even though we’re relatively new in town, we bumped into several people we know — one of the aspects of small-town life that I really enjoy.

After both queens had made their first circuit of the square, we headed back to our friends’ house. The party went on without us for several more hours. 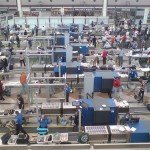