You are here: Home / Prepping the Move / Countdown / Flying Overseas with your Dogs or Cats 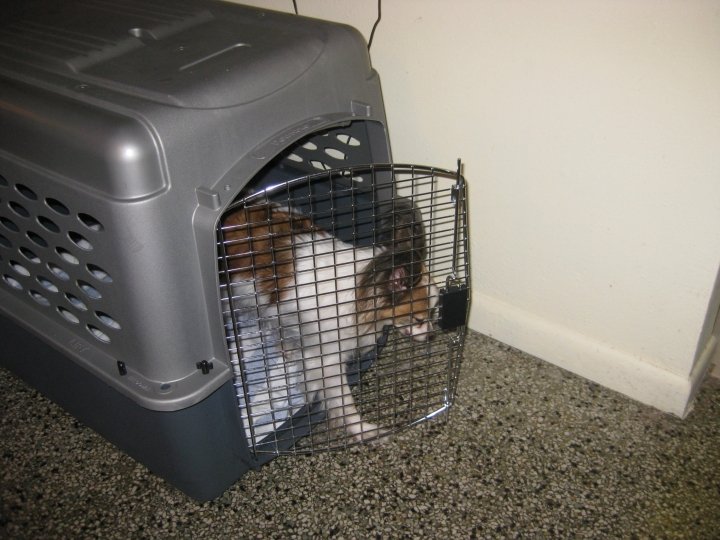 With our anticipated overseas move date less than 90 days away, we’re getting down to the wire on some of our planning. One of the big issues we have to muddle through is flying with our three dogs from here to there.

We’ve been poring over airline and embassy websites, and asking lots of questions of people who’ve already done it. It doesn’t help our planning efforts that Panama changed some of its rules on November 1, but hasn’t told us yet what those changes are.

Recently I spoke with a single mom who moved with 10 animals to Belize a couple of years ago. She highly recommended American Airlines to me, as the airline easiest to work with for pet transportation.

I hadn’t originally looked at American, because they don’t have direct flights from Orlando to Panama. They do, however, fly directly from Miami.

We can’t take our three dogs on Copa. Sure, they transport pets, but they have this weird Catch-22 thing going on. Our dogs are each under 20 pounds — one is 9, one is 11 and one is 15. But they are all too large to fit under a seat in the cabin. (The shortest one is 11″ at the withers, most underseat areas now are 9-10″.)

Needless to say, we won’t be flying Copa on this trip.

Delta has direct flights from Atlanta, but that’s an 8+ hour drive, so we’re not really considering it. We’ve also heard some disturbing things about Delta’s record when it comes to shipping pets.

American flies direct out of Miami, about four hours away, and they’ll let us send two dogs in the same crate, but not all three. However, it looks as though that’s the best we can manage. At this point, American looks like the most pet friendly airline.

Special Kennels Approved by IATA and the Airline

If your pet is small enough to fly in the cabin, you’ve got more flexibility in choosing his container. Soft-sided carriers are popular and readily available. But if your pets are flying as baggage, they need kennels that are approved by the International Air Transport Association and your airline. IATA standards are the same, airline standards vary.

IATA requires that the kennel be rigid and non-collapsible. (We can’t use the wire crate our dogs are accustomed to because it could collapse during flight.)

The pet must be able to stand in the kennel with at least 2″ of headroom, and turn around, sit and lie down in a “natural” position.

Most airlines require that doors be extra-secured with zip ties at the four corners so Fido can’t possibly escape. The kennels we purchased also have holes for tie-downs at each of the four outside corners, I guess to make it easier for airline personnel to secure them so they don’t shift during flight.

During the flight, your pet needs access to food and water inside the kennel, and airline personnel need to be able to refill them without opening the kennel door. Some companies now make side-by-side dishes that attach to the wire door of the kennel for that purpose.

Kennels must be clearly marked with the words “Live Animals” in letters at least one inch high.

Kennels must be clean and free of foul odors. No, I’m not kidding, that’s a requirement.

Most airlines also require you to tape a bag or pouch with a small amount of food to the top of the kennel, to have on hand in case of a delay that necessitates feeding.

If you need to purchase a new travel-approved kennel for your canine or feline companion, start getting her used to it as early as possible.

We brought in the kennels last week, and just let them sit around for a few days. Then I started tossing treats inside a few times a day. Now I’ve progressed to giving the treats to the dogs by hand once they’re inside.

This weekend we’ll remove their old, familiar wire crate and have them sleep in the new ones.

By the time we’re ready to go, the dogs should be completely comfortable with their new kennels. That means less stress for them and for us when they get on the plane.

Have you flown your pet overseas? What steps did you take to prepare her — and you — for the journey?