You are here: Home / Prepping the Move / Narrowing Your Country/City Search / Asia / Travels from Bhutan: Repatriation and Reflections 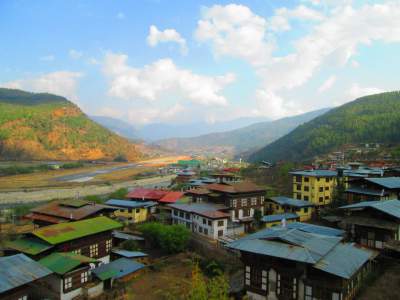 If you spend enough time in a foreign country, things stop feeling “foreign” and start feeling normal; sometimes you don’t realize just how normal until you return home. In my case, I expressed my reverse culture shock by stormily watching Americans perform tasks, and then saying, “That’s nice, but the Bhutanese do it like this.”

You realize a few things about your home country when you repatriate; sometimes it’s noticed with relief (thank goodness for brewed coffee instead of instant) and sometimes with horror (a cup of coffee costs how much??).

Here are a few of the observations I made where America would do well to take a leaf out of Bhutan’s book:

Americans Produce a Lot of Waste

I mean, a LOT of waste. There was one small trash can in my dorm room in Bhutan (it actually wasn’t a can – just a cardboard box we repurposed) and three people produced so little trash, we hardly ever had to empty it. The majority of our waste was – guess what – packaged food wrappers which were all produced by American companies such as Lays.

Paper products also don’t accumulate in Bhutan. Tissues, paper towels, and toilet paper aren’t waste products because they aren’t used. If I wanted TP, I had to carry it with me because it wasn’t stocked in bathrooms.

Americans Have an Interesting Relationship with “Comfort”

For the most part, Americans believe that comfort is a right and a necessity. Bhutan is not exactly a place to escape with all the comforts you’re accustomed to – I had to deal with the unavailability of public bathrooms, the filth of the few bathrooms that do exist, malnourishment, lack of A/C, lack of laundry washers and dryers, extreme issues with wifi, hordes of biting flies…the list goes on.

(Disclaimer: Not every traveler has to deal with these issues. But if you’re living like the Bhutanese do, and not staying in luxury hotels…)

Dealing with this stuff for five months gives you perspective on how much a person can tolerate. My roommates happily slept all night under conditions (under florescent lights, with loud music playing) that turned me into a sleepless snarling mess.

Being in Bhutan made me confront all those misconceptions I had about how much comfort is owed me. I couldn’t change the outer conditions, so I had to struggle with inner beliefs. I couldn’t make the stray dogs stop howling all night, so I had to transition to a position where I could be comfortable with the noise.

Seeing how hard the Bhutanese people work makes you feel guilty if you think too much about creature comforts. You can be hiking up a mountain at 3000 meters, huffing and puffing and wanting to sit and take a rest, and a 60-year old couple walks past with 50lbs of stone and wood and building materials strapped to their back. And they’re walking twice as fast as you. And they pass you three more times before you finish your hike.

Bhutan just held its second democratic election. Despite the fact that many rural villagers had to walk for days to reach a polling station, Bhutan still had a higher voter turnout than the United States.

Can you imagine if you were told that you had to walk for two days just to vote? No one would ever show up at the polls.

The Poorest American is Poorer than the Poorest Bhutanese

Despite the amount of poverty in Bhutan and the increasing gap between the haves and the have-nots, there is one important difference between poverty there, and poverty here.

In Bhutan, impoverished people still have food and a place to live. They are poor, but not wanting.

The close family relationships in Bhutan mean that houses will often hold multiple generations. Parents raise children with care, knowing that their children will support them when they grow old. No one will ever have to leave home if they don’t want to; the whole family works as subsistence farmers so they know where their next meal is coming from.

It’s impossible to walk around urban areas in the States without seeing homeless people living on the streets. But in Bhutan, I never saw a single homeless person in the five months I was there. Seriously – not even one.

This spring, I attended a discussion held at my college between representatives from all five political parties of Bhutan. One representative, appealing to the pathos of the audience, told a story about the time he visited the poorest woman he had ever met.

She lived in a tiny house. The only furniture she had was a makeshift bed and a locked chest in the corner. He looked at this woman, who owned nothing, and asked, “What do you treasure so much that you lock it in that chest?”

She opened the box to show him – it held her leftovers from dinner the night before, which she locked up so wild animals couldn’t eat it.

A sad story, yes, but I was left with one big impression – the poorest woman he had ever met still had a roof over her head and food to eat.

No place is perfect. Everywhere you travel is a little different. But that’s why we should travel; it opens us up to process ideas in a new way. It lets us look at our own culture with different eyes.

It allows us to see the best and the worst, so we can look at these things and make decisions about the kind of impact we want to have on the world: do I want to leave a legacy of waste? Would I rather be happy under difficult circumstances or complain about what I don’t have? What can I do to help others?

And what kind of lessons can I learn about my own beliefs when those beliefs are challenged?

See Catherine’s previous articles about her five months in Bhutan

Part One: The Last Shangri-La