You are here: Home / Panama / A Day at the Beach — Playa Uverito, Panama [video] 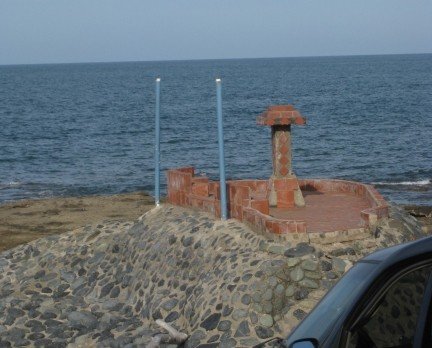 When we decided to move to Panama, we liked the idea of being close to both beaches and mountains.

Last Saturday we spent the afternoon at Playa Uverito. That’s the beach most folks from Las Tablas use on a regular basis.

Only about six miles out of town over a brand-new, top-notch road, it’s easy to get to.

Like other Panama beaches (at least the ones I’ve seen), the sand is dark. Not black sand, but definitely not white either.

Plenty of houses line the beach as well as a half dozen restaurants and bars.

As you drive in from the main access road, there’s a parking lot with a row of covered cabanas in front of a gently curving bay. To the left, as you face the ocean, are the businesses.

With a big rocky area in the middle, the beach naturally divides itself into two areas. The section of beach past the businesses and the rocks is barely used. Both times I’ve been there — on a Saturday — we’ve had this entire stretch of beach to ourselves.

On our most recent visit, we could see a family of children clambering about on the rocks in the distance. Late in the afternoon three men drove onto the beach towing a boat. They launched it and put-putted off to do some fishing.

At Uverito, there’s enough wave action to be interesting without being overwhelming. This is not a world-class surfing destination, but instead is a very pleasant beach for swimming, paddling and sunning. The first time I was there the water was beautifully cool and refreshing. This time it was quite warm, a bit like bath water.

When we started to get hungry, we walked back to the restaurants. English friends had recommended one where they serve terrific fish and chips, and we wanted to try it out. There was just one problem — I wasn’t sure which one it was, and they had only referred to it by the owner’s name, Pedro, not the restaurant name.

When we arrived at what I thought might be the right place, I asked for Pedro. Si, si, the server smiled. Esta aqui. So we met Pedro at the el Capitan restaurant, he told us what to order and then went to the kitchen to cook it for us.

Our friends were right, it was top notch. The corvina was moist and succulent and nicely flavored with spices, the fries were crisp and hot and the drinks were cold.

From where we sat we could see the section of beach closest to the parking lot. Gradually as we ate, we watched more and more people arrive. A bus disgorged a couple of dozen running, jumping children on some sort of outing. A young couple strolled by, posing for pictures for each other.

At some point we heard live music coming from the restaurant across the street.

When we left at the end of our day, people were still arriving to stroll on the beach and listen to the live band. It was lots busier in the evening than it was during the day — which is fine with me!

Notice how many people show up in the first half of the video! There was one more person there — my husband, who stood behind me the whole time so as not to show up on screen. 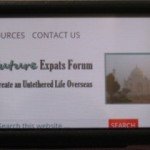 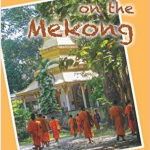 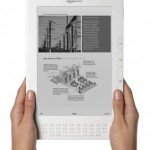